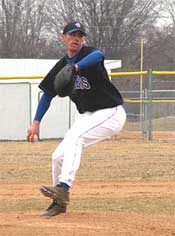 As a former Division I college baseball pitcher, I have first-hand knowledge of how important a strong and healthy rotator cuff is. This is a lesson as a sports medicine physician that I try to pass on to all the young pitchers for whom I treat. It has mainly been thought that a rotator cuff strengthening program serves to decrease a pitcher’s risk of shoulder injuries. This is a study that lends even more credence to this belief and also takes it another step further.

This study was presented by sports medicine specialists from Edina, MN. Four high school and college baseball teams were randomized into two groups. One group performed rotator cuff and scapular stabilization exercises three days a week during the course of the baseball season. The other group served as the control group and only performed the coaches regular conditioning program. Each group consisted of fifteen males whose average age was 19.2 years.

Players’ pre-season pitch velocity and shoulder strength was recorded. At the end of the season pitch velocity and shoulder strength was again tested. The group of pitchers that performed rotator cuff and scapular stabilization work during the season increased their pitch velocity by an average of 2.5 mph. Pitch velocity in the control group did not improve, and the difference between the two groups was statistically significant at the p<0.05 level. Usually during the course of a baseball season, a pitcher’s arm gets tired from wear and tear which leads to a drop-off in pitch velocity. However, in this study eleven out of the fifteen pitchers in the intervention group increased their throwing velocity! Also, the intervention group had significantly fewer shoulder complaints or injuries when compared to the control group.

Take home message: Pitchers at all levels should be performing rotator cuff and scapular stabilization work both in the off-season and during their baseball seasons. The evidence continues to show that it decreases injuries and improves performance.

Study #2 – Bone Mineral Density, Women, and Strength Training (2)
There is evidence in the medical literature that strength training programs can improve bone mineral density in women from adolescence and past menopause. However, there still is some debate, as some studies have failed to show that strength training can increase bone mineral density (BMD) in postmenopausal women. Part of the confusion lies in which exercises are chosen, the weights used, and the methods employed to perform the conditioning sessions in the studies.

This study was a collaboration between the Institute of Sports Medicine in Erlangen, Germany, and Trueman State University in Kirksville, Missouri. Thirty postmenopausal women were randomized into two different groups: the strength training group and the power training group. Each group performed the same resistance training program for 24 months. The only difference was the tempo at which the exercises were performed. The strength training group both lowered and raised the weights in four seconds. The power training group lowered the weights in four seconds, but raised them as fast as possible in approximately one-half second. The movement of weights with gravity, the easier portion of a lift, is called the eccentric part of the exercise. The harder part of the lift, against gravity, is called the concentric part. Also during the concentric part of the lift, your muscles contract to generate the force. During the eccentric part of the lift, your muscles generate force but in a stretched or lengthened position. In training programs, tempo is usually written as three digits (sometimes as four) with the eccentric number first, a pause as the second number, and the concentric speed last. For the strength training group, this would be written as 4-0-4; whereas, for the power group it would be written as 4-0-0.5 or 4-0-X where the X stands for as fast as possible.

Both groups took calcium and vitamin D supplements, completed their respective resistance training routines, and had bone density (DXA) scans performed at the beginning and end of the study. The results showed that both groups gained bone density in their lumbar spine, their femoral neck, and the distal end of their radius. This gain was statistically significant when compared to a control group who did not exercise over the two year period. Also, the power training group had statistically significant gains in bone mineral density over the strength training group – with a p-value of <0.05. These are important findings for all women approaching menopause or who are postmenopausal.

Take home message: Strength training has been shown to increase BMD in postmenopausal women. It is important to include some power training – moving weights explosively in the concentric part of the movement, but then controlling their eccentric movement. This is yet another reason why all women should include weight training in their routine.

These were two more great studies. I’ll be back with more studies presented at the national ACSM conference.