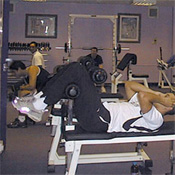 All material on this website is protected by copyright. Copyright © 2011-2021 by Doctor Of Fitness LLC.